Any snare drumming book worth its salt will include an explanation of how to hold the drumsticks using traditional grip. There has not been a lot a variation of the way the left underhand grip is described since 1812, when Charles Stewart Ashworth undertook the effort in his book, A New, Useful And Complete System Of Drum Beating.[1]

Beginning drummers find this mixed grip method challenging to learn and many drummers have abandoned the style in favor of matched grip. The truth is that right-handed people will always have difficulty getting the left stick under control, regardless of the grip technique used. Let us assume that you have overcome emotional restrictions and have discovered for yourself the joy of playing traditional grip—this information is for you!

There is a uniquely American innovation to the left underhand grip that is alien to most drummers. This method is often referred to as “the Bobby Thompson grip” because Thompson did so much to promote it through his work as a drum corps instructor and arranger (Sons of Liberty, Blessed Sacrament Golden Knights). However, Mr. Thompson actually learned the method from Les Parks when they performed together in the Sons of Liberty drum and fife corps.

Jay Tuomey (Sons of Liberty, The Lancraft Fife & Drum Corps) is quoted in an article written by Ken Mazur as saying that the technique was “invented” by master drummer and teacher Les Parks.[2] Parks devised this method with encouragement from his teacher, Morris Goldenberg, at the Julliard School of Music in New York City.[3] The concept behind it was to find a better way to facilitate left hand stick control by using more of the index finger and less of the thumb. Parks believed a flat-handed thumb grip could not deliver the kind of precise control and power needed for competitive rudimental drumming.

Parks graduated from Julliard in 1950. During his career, he instructed the St. Vincent Cadets, Garfield Cadets, Hawthorne Caballeros, the New York Skyliners and many others. He founded The Sons of Liberty, an influential fife and drum corps from Brooklyn, New York (1947-1968).

The Parks method resembles the traditional left hand grip in every respect except that the little finger is curled back. The middle finger is extended along side the stick to balance and assist in guiding the stroke, but it does not touch it. The index finger acts alone as the primary controlling digit by pushing down or pulling in. The thumb is not used other than as a fulcrum to support the stick’s balance point.

According to Ken Mazur, Marty Hurley said “When the pinky finger is back it forms a better bridge for the stick to rest on. The ring finger is less likely to move. Les and Bobby spent hours perfecting the technique. They wanted a method that had the left hand under more control.”[4] Hurley was a student of Bobby Thompson, and the percussion arranger/caption head of the Phantom Regiment (1976-1992).

1. The curled little finger acts as a natural pendulum, which helps rotate the palm of the hand to position the thumb topside. More arm muscles can then be involved to enhance power, control, and stamina. The forearm has more outward rotational range available to play full strokes and accents.

2. Upward support from the curled little finger enables the ring finger to work like a springboard under the stick. This creates a more secure grip by helping the muscles of the left hand apply pressure where needed.

3. It has the psychological effect of bringing the drummer’s attention to the details of the grip into sharp focus. The Parks method does not require the player to deviate from the established principles of a correct underhand technique, but it does enhance awareness of how one is using it. It forces the drummer to concentrate and burn the habit of an effective underhand grip into the muscle memory until it becomes a natural and unconscious act.

The traditional snare drum grip dates back at least to the fifteenth century[5] and the Les Parks method of curling the left hand’s little finger is not described in any drumming publications prior to 1950. This is truly a modern American innovation that is worthy of attention. If you are a traditional grip player and are serious about snare drumming, you should make a sincere effort to experiment with the Parks grip method.

AUTHOR’S NOTE: I learned the Les Parks method from my friend, Dave Moyer, an excellent drummer who had played snare drum with the Dubuque Colts Drum & Bugle Corps (Iowa, late 1970s). I noticed that his left hand traditional grip was unique in that he was curling the little finger; I asked him about it and he explained its advantages.

My next exposure to the Les Parks technique came from another friend, Dave Nicholas, also an excellent snare drummer formerly with the Colts (early 1970s). I noticed that Nicholas used the same grip technique as Moyer. When I asked him about it, he explained it the same way I learned it from Moyer.

Moyer and Nicholas never mentioned any connection between their grip method with Les Parks or Bobby Thompson. “That’s just how we did it in the Colts” is all they knew of its history. At that point, I assumed that it must have been something unique to the Dubuque Colts.

Years later, I read an article written by Ken Mazur titled “The Perfectionists.”[6] Mazur identified the history behind the curled little finger technique and at last all the pieces of the puzzle came together.

I have fully embraced the Les Parks grip method, although initially it was a difficult adjustment, it takes a concentrated effort to keep the little finger cocked back. With persistence, it soon became ingrained to the point where not curling the little finger feels unnatural.

Follow this link to a video demonstration of the Les Parks left hand grip technique:  http://youtu.be/c_SkLdNM5VI?list=UUMHKFKcMXTxdcbpDIYplylQ 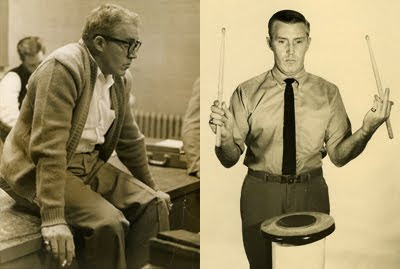 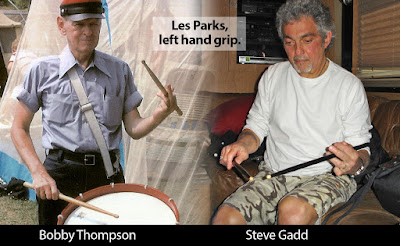 As a member of the Garfield Cadets, I can remember Les telling me he'd have to break my arm to get me to play correctly (lol). He taped my pinky closed. He used a popsicle stick to straighten my middle finger, a ruler to keep my left wrist and arm straight and had me play inside a wire coat hanger. He kept pulling my thumb up farther and farther. I was scared to death of not making the line. Eventually his technique was adopted. I consider myself lucky to have been a student of this master drummer. The next year I went to Skyliners to work with Eric Perrilloux. Another master...but a whole different style.
JD

Thank you for your comments to this blog.

I only know of Les Parks through research and study. It is great to hear from somebody who was fortunate enough to actually learn from him and, Eric Perrilloux!

Nice article. I was a student of and now friend of Ken Mazur and was taught this grip when Ken trained me. There's a typo in your 3rd section of Park's comments, I **added** the word I think you meant to;

3. It prevents the palm-up, flat-handed playing that results in an over use of the thumb. Parks believed that drummers who use too much thumb could **not** control the stick at the level of precision required for competitive rudimental drumming.

Les and those Sons of Liberty guys have been unmatched by any of the players since. They devised the system that worked all the time, every time. The thumb has the least amount of muscle tissue running up the forearm. The ring finger has the most. (You can swing a baseball bat or axe without your thumb and index on the handle and still have control and power. But swing it with just the thumb and index fingers and feel the lesser grip/control/power over the bat.) It's why you keep the fingers wrapped on the right hand stick and use the ring finger on left hand to support and control the stick. As Ken would teach: "there's a lot of power there [in that finger]. USE IT."

The style tailor's to the individual regardless of body type and bone structure. It utilizes the physics of the stick movement as well as physics of how the fingers/wrists/arms naturally can move for ultimate power, speed, and control. Once you learn this grip and try to loosen it for modern style grip styles, you feel instantly the lack of control and precision it provides. I had to relax my grip when I marched Crossmen and started playing on kevlar and using more bounce (or I'd get carpal tunnel hitting into the head like I did on mylar/with this playing style.) Thankfully though it was a minor adjustment as the Crossmen at that time (under Mark Thurston) were still moving their arms when playing, like the Sons guys did. I just had to loosen my fingers some to match my line mates.

Thanks for bringing this information to light and spreading the word.

Thank you David! I have corrected the typo that you pointed out.

I did not know about the Les Parks technique until a few years ago when I learned it from a friend who played snare drum with the Dubuque Colts during the 70s.

He had no idea of the history and origins behind it only that it worked well for him. His instructor "back-in-day" was Don Porter Jr.

I figured it was maybe just a Colts thing until I read about it in an article by Ken Mazur.

I got curious and did some more research but information has been hard to come by.

I am very grateful for your enlightening input. Thanks again!

Hi. I recently stumbled on to this article. Has anyone who knows how to play with this grip, posted a video clip anywhere demonstrating the mechanics of it?
I learn much easier by observing.

Your site is very interesting. You certainly
play very well.
Thanks,
Rick Baker

Hello Rick: I intend to make a video explanation of the Les Parks grip soon. I will post it at this blog. Steve Gadd uses this grip technique and refers to it as the Bobby Thompson grip. However, Thompson learned it from Les Parks – they were both associated with "The Sons of Liberty" F&D corps. If you search YouTube you can find video clips of Gadd using the Les Parks grip. 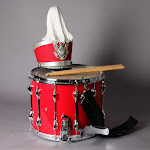